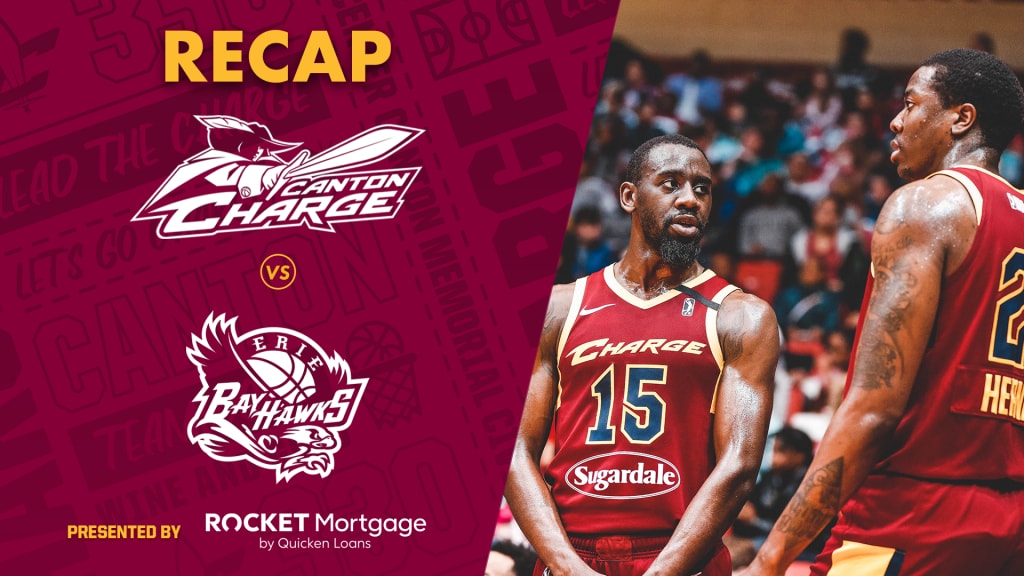 ERIE, PA – The Canton Charge (28-14), had their seven-game win streak snapped at the hands of the Erie BayHawks (13-29), 123-115, at the Erie Insurance Arena on Saturday night.  The defeat was Canton’s first since February 13th and snaps a six game winning streak against the BayHawks, with the Charge’s last loss in Erie coming on 2/4/17.

With the game tied 83-83 heading into the fourth quarter, the BayHawks rolled off an 11-0 run to begin the period for their largest lead of the game. The run would increase to 23-9 and push the Erie’s advantage all the way ahead at 106-92.  The Charge would fight to cut their deficit to 115-109 with 2:14 left in the game, but Jaylen Adams scored three of his 18 fourth quarter points for the BayHawks to hold on for the win.

Adams finished with a game-high 31 points on 11-of-16 shooting in 37 minutes off the bench to lead Erie.  Zylan Cheatham posted a double-double of 20 points and 14 boards in 38 minutes.  Scottie Lindsey added 17 points off the bench and Tony Carr scored 16 points for a BayHawks team that hit 45-of-81 shots collectively tonight (55.6%).

The Charge next make a visit to the Central Division rival Windy City Bulls this Tuesday, March 10th at 8:00 p.m.! There is no better time than now to join Charge Nation! Become a 2020-21 Charge Nation member and attend the rest of this season for FREE!  You’ll also receive complimentary Cavs and Monsters tickets plus tons more added value! For more info, find us at a game, visit www.CantonCharge.com or call 866-444-1944.  The Canton Charge are part of the Cleveland Cavaliers organization and are also owned by a group led by Cavaliers Chairman and Quicken Loans Founder and Chairman Dan Gilbert. The group also owns and operates the Cleveland Monsters of the American Hockey League, who play their games at Rocket Mortgage FieldHouse in downtown Cleveland.