The Canton Charge, powered by the Cleveland Cavaliers, today announced the initial six priority home dates for the 2019-20 NBA G League season. The opponents, times and rest of the schedule will be released later this summer. 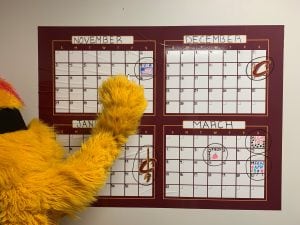 The Charge will look to honor or nation’s heroes early in the season for the November 9th date.  The Saturday, December 14th and Saturday, January 18th games will bring the best of Rocket Mortgage FieldHouse to Canton for Cavs Night celebrations.  The annual School Day game will come on Wednesday, March 4th this year, while Fan Appreciation Night will take place on Saturday, March 14th.

For more information on the six priority dates and how you can lock in your tickets, speak to one of our representatives by callinng 866-444-1944.  The Canton Charge are part of the Cleveland Cavaliers organization and are also owned by a group led by Cavaliers Chairman and Quicken Loans Founder and Chairman Dan Gilbert. The group also owns and operates the Cleveland Monsters of the American Hockey League, who play their games at Rocket Mortgage FieldHouse in downtown Cleveland.