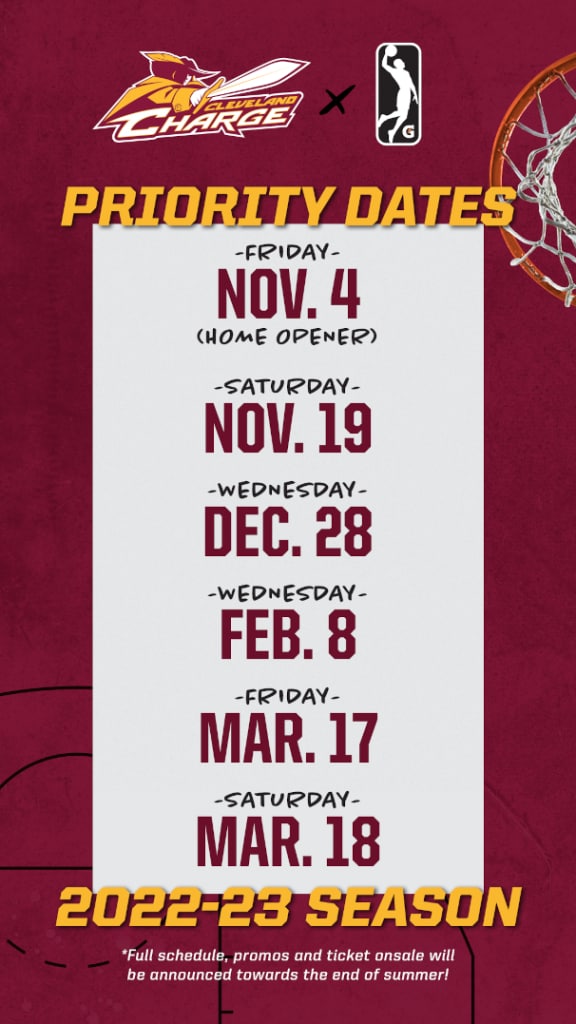 CLEVELAND – The Cleveland Charge of the NBA G League, presented by Cleveland Clinic, have announced the initial six priority home game dates for their second season in downtown Cleveland. It all begins when the Charge return to Cleveland State University’s Wolstein Center for their Home Opener on Friday, November 4!

Stay tuned to Charge social media channels this offseason as the themes, promotions & giveaways for these six priority dates will be announced over the next several weeks. The full 2022-23 Charge schedule is expected to be released by the NBA G League near the end of the summer.  Fans can stay up-to-date on the latest team news by following: @ChargeCLE on Twitter & Instagram and on Facebook at www.facebook.com/ChargeCLE.

Charge Season Memberships which include the best seat locations, year-round member experiences, exclusive merchandise, access to Cavs tickets and more start at only $5 per game and are on sale now! Charge Group Outings are also on sale with tickets starting at just $5 per seat! Special Fan Experience Packages which include: On-court basketball games and experiences, band and choir performances, player high five tunnels, Color Guards, National Anthems and more are NOW available for the 2022-23 season. Fans can place their $50 Initial Payment today to lock in experiences, game dates and seat locations! Please call 216-420-2730 to speak with one of our representatives or fill out the form here for more information.