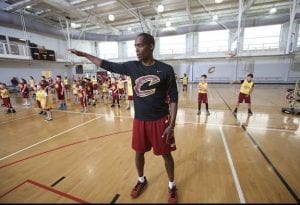 Geriot was previously an assistant coach/player development for the Cavaliers in 2018-19 after serving as the assistant video coordinator/coaching assistant with the team from 2016-18 and a seasonal video coordinator during Cleveland’s 2015-16 championship season. Prior to joining the Cavs, Geriot was with Campbell University as an assistant coach from 2013-15 and was with Princeton University as an assistant coach from 2011-13. Geriot, who is originally from Springfield, PA, has a degree in political science and history from the University of Richmond, where he played four collegiate seasons and led the Spiders to two NCAA tournaments (2010, 2011), including a Sweet 16 appearance (2011).

Frankoski has been with the Cavs for three seasons, most recently working as a video assistant while taking part in the player development field. Frankoski received his Bachelor of Arts degree in psychology from Columbia University, where he also played collegiate basketball for four seasons, became team captain his junior and senior seasons and finished his career ranked fifth on the school’s all-time three-pointers list with 168 and 10th in three-point field goal percentage at .398. The Florham Park, NJ native also served as a graduate assistant at the University of Pittsburgh, where he studied health and physical education.

Hartman has spent the past two seasons as basketball analytics coordinator, where he helped incorporate analytics and technology into the Cavs front office and coaching efforts, including draft preparation, trade evaluation, salary cap analysis and roster planning. He also contributed as a college scout. With this promotion, he will focus full-time on bringing a data-driven approach to player development and coaching strategy. Prior to joining the Cavs, Hartman graduated from the University of Pennsylvania and spent three years working at OrderUp, a food delivery startup which was acquired by Groupon in 2015.

Outlaw spent the past three seasons with the Memphis Grizzlies, including the 2018-19 campaign as an assistant coach/player development. Prior to that, Outlaw worked for the Los Angeles Lakers as a player development coach and video coordinator (2011-16) and as director of basketball operations for the Marist men’s basketball program (2009-11), where he also served as assistant coach during his second year. Outlaw also played college football at Villanova, where he was a standout wide receiver. Following his collegiate career, he was signed by the Philadelphia Eagles for parts of the 2006 and 2007 seasons and played for the Rhein Fire of NFL Europa in the spring of 2007.

Gerrity returns for his seventh season with the Cavaliers. Prior to his current role as director of player development/assistant coach, Gerrity spent two seasons as director of player development for the Canton Charge, the Cavaliers’ exclusively-operated NBA G League Team, and a player development assistant with the Cavs (2016-2018). He initially joined the team as an assistant video coordinator in 2013 and before starting out his career in coaching, Gerrity played two seasons in the NBA G League for the Dakota Wizards, Erie BayHawks and Maine Red Claws. The Yorba, CA native earned his degree in sociology at the University of Southern California, where he played collegiate basketball in 2009-10 after also playing at Pepperdine and UNC Charlotte.

Vincent has been with the organization since the 2007-08 season. Since joining the Cavs, he has held several titles within the basketball operations department, including special assistant to the head coach/manager of advance scouting (2016-2019), manager of video/advance scouting (2011-2016), assistant video coordinator/advance scout manager (2008-2011) and seasonal video assistant (2007-08). Vincent grew up in Western New York and attended Michigan State University, where he worked for Coach Tom Izzo and the Spartans men’s basketball team for four years as a student manager.

Olson joined the Wine & Gold prior to the 2018-19 season after being an independent basketball trainer, working directly with NBA teams, colleges and nationally ranked high school players for over a decade. He developed a way to explain shooting and quantify a player’s shot mechanics with his company, Shot Analysis. Olson also played four years at Amherst College (Division III), leading his team to three straight Final Fours (2006-2008) and a National Championship in 2007. He received the National Player of the Year Award by the NABC in 2007 and 2008, and was a finalist for the Bob Cousy Collegiate Point Guard of the Year Award (2007 and 2008). Olson helped tie the Amherst mark for most all-time wins by a graduating class, posting a four-year record of 111-12.

Jones was previously a member of the Canton Charge coaching staff (2016-2019), most recently serving as the team’s associate head coach this past season. In his new role, his responsibilities will be with emphasis on the individuals between the Cavs and Canton, assignment and Two-Way players, and paying special attention to their on and off court development. Prior to joining the organization, Jones coached in the Netherlands for six seasons, winning multiple championships as an assistant and head coach in the Dutch Basketball League. Before his coaching career, he played 10 years in Europe with stints in Belgium, Poland, the Netherlands, Cyprus and Spain, appearing in multiple All-Star games and winning two titles with Den Bosch (the Netherlands).

Darnell spent the 2018-19 season with the Utah Jazz as the team’s special assistant to the head coach. Prior to his lone season with the Jazz, Darnell was with the Phoenix Suns (2013-2018), mostly working in video, player development and basketball operations. The Stafford, VA native also played collegiate basketball for four years at the College of William & Mary, where he helped them advance to the Colonial Athletic Association tournament title game for the first time in school history during his junior season.

Shunnar enters his first year with the Cavaliers after serving as a graduate assistant for the University of Michigan’s men’s basketball program. With the Wolverines, he analyzed film, provided analytics to prepare scouting reports, helped Coach Beilein’s coaching staff with on-campus recruiting events and co-supervised the student managerial program. Shunnar was also a walk-on at Toledo in 2008 and spent three seasons with the Rockets before transferring as a senior to Michigan to complete his undergraduate degree in material sciences from U-M’s College of Engineering. He also received his master’s degree in higher education at Michigan.