The Canton Charge, powered by the Cleveland Cavaliers, are excited to announce February’s winner of the Most Valuable Teacher of the Month presented by WGU Ohio is Zachary Taylor from McKinley Senior High School.

Mr. Taylor is a band teacher at McKinley Senior High School. He also assists with the Canton Youth Symphony’s percussion section. Mr. Taylor works tirelessly to provide quality music education to the students of McKinley HS. Especially during the COVID-19 pandemic, he has been able to continue educating his students while keeping them safe in the classroom.

Following the announcement, Mr. Taylor took a moment to reflect on what he enjoys about teaching and how the pandemic has just continued to help him grow.

We have been lucky with our band schedule as it has enabled me to still have rehearsals in the evenings with all of the students. Although we spent the first half of the year only seeing the kids one day a week we were still able to make musical progress because of our evening practices. We supplemented these rehearsals with online material that also assisted in guiding the students in the musical journey. Most of our virtual teaching has been asynchronous for music because it is near impossible to assess students in real time, as a group, online with lag time and differing volumes from devices. 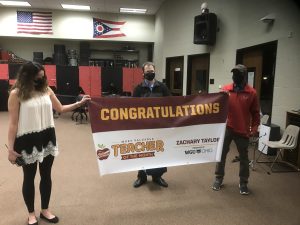 Our band program was featured in an issue of Teaching Music, which is a national publication geared toward music educators. We were the feature story that spoke about the success we had found in merging two high schools together, keeping part of each bands identity all while pushing ahead to carve out a new image of a unified band program. It spoke volumes about what the students were capable of when they all had a common goal in mind. The foundation of everything we did that summer was that we were the group that would determine if the merger was successful or not. We had two community performances (community parade and hall of fame parade) before any sports team even ran their first play. We had no other choice than to be a success. The school and community depended on it. When we hit the street for our first performance you couldn’t tell that half of the band was from a different high school less than three months earlier. Throughout that year it was extremely rewarding to see new friendships form and the band truly unify as one group.

The Hall of Fame parade is one of our most enjoyable performances each year. The kids work all summer for it and it is our first real performance as a new band each year. To be able to march up Cleveland Ave in front of tens of thousands of people is amazing. It is overly rewarding for our students because you are able to find our community members all the way up the route offering words of encouragement to the kids when they see them getting tired after 2+ miles of marching. When they all reach the end and realize what they have accomplished it is a nice moment to stand back and smile.

The high school music department at McKinley has developed a tremendous culture of support for each other. We know that it takes all of us to create a department and program that students want to be involved in. We have to make it meaningful for the kids to feel like they have purpose. COVID has put a tremendous amount of stress on music programs all over the country. We have had to find a way to continue doing what we do while keeping students safe and socially distant. We, as a department, have spent hours bouncing ideas off of each other as to how we can still have meaningful and impactful lessons all while abiding by these guidelines. It has been a team effort to keep moving forward.