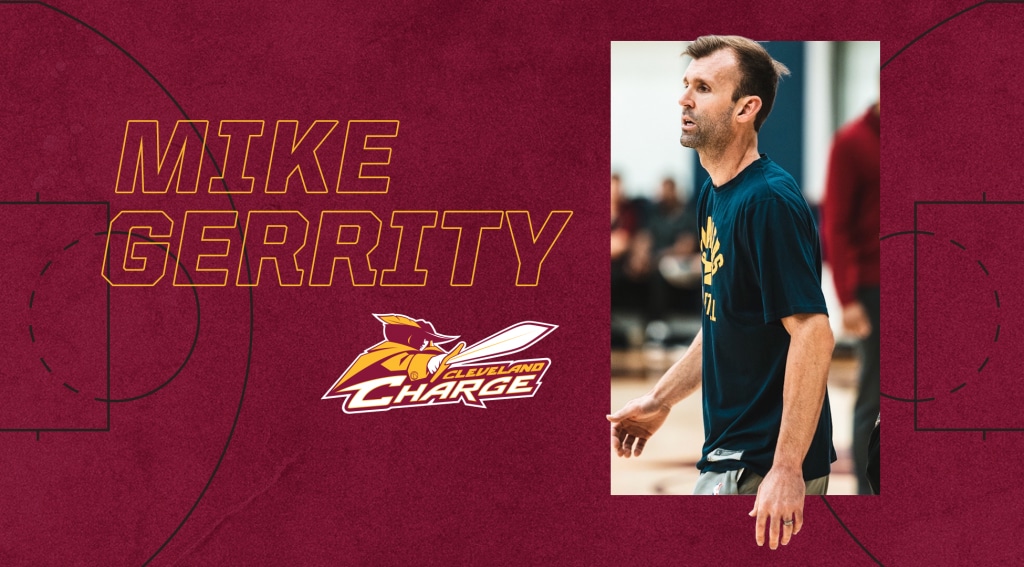 CLEVELAND – The Cleveland Charge of the NBA G League, who open their second season in Cleveland at Cleveland State University’s Wolstein Center on Friday, November 4th at 7:00pm vs. the Motor City Cruise, have announced Mike Gerrity as their Head Coach for the 2022-23 NBA G League season.  Gerrity comes to lead the Charge after spending the last nine seasons in various roles with the Charge’s parent club, the Cleveland Cavaliers.

“We are thrilled to have Mike become the newest head coach of the Charge,” said Charge General Manager Brendon Yu.  “Mike has a plethora of experience at the NBA level serving in a variety of roles on staff, but really excels in player development.  Mike also brings a unique perspective as a former “D League” player himself.  I’m really looking forward to working with him and having him apply his knowledge and experience to lead the Charge.”

“We are so excited to have Mike Gerrity lead the way as Head Coach of the Cleveland Charge,” said Cavaliers Head Coach J.B. Bickerstaff.  “There is no better person for this job and we have extreme confidence in his ability to develop players. We’ve seen the fruits of his labor with the Cavaliers and we expect the same commitment and dedication with the Charge.”

Gerrity was promoted to Assistant Coach for the Cleveland Cavaliers in September 2021 after spending the past three seasons as Director of Player Development/Assistant Coach (2018-2021). Gerrity also spent two seasons as director of player development for the Canton Charge, the Cavaliers’ exclusively-operated NBA G League Team, and a player development assistant with the Cavs (2016-2018). Gerrity initially joined the team as an assistant video coordinator in 2013.  Before starting out his career in coaching, Gerrity played two seasons in the NBA G League for the Dakota Wizards, Erie BayHawks and Maine Red Claws. He starred at the University of Southern California in 2009-10 after also playing collegiate basketball at Pepperdine and UNC Charlotte. While at Pepperdine, he was named to the West Coast Conference All-Freshman Team and tabbed as the WCC Freshman of the Year by CBS Sports Line.  The Yorba Linda, California native earned his degree in sociology from USC.

Access. Excitement. Value. Memories. Fun… Charge!!  Yes fans will see great hoops, but they will also experience a bucket of fun when they attend a Cleveland Charge game! Stay tuned for the reveal of the 2022-23 Charge Promotional Schedule that will include fun-filled theme nights, food and beverage promotions & ultra-exclusive giveaways for all Charge home games. The PROMO SCHEDULE will be announced soon on our Charge social channels: @ChargeCLE on Twitter & Instagram and on Facebook at www.facebook.com/ChargeCLE.

Charge Season Memberships which include the best seat locations, year-round member experiences, exclusive merchandise, access to Cavs tickets and more start at only $5 per game and are on sale now! Charge Group Outings are also on sale with tickets starting at just $5 per seat! Special Fan Experience Packages which include: On-court basketball games and experiences, band and choir performances, player high five tunnels, Color Guards, National Anthems and more are NOW available for the 2022-23 season. Fans can place their $50 Initial Payment today to lock in experiences, game dates and seat locations! Please call 216-420-2730 to speak with one of our representatives or fill out the form here for more information.  Single game tickets will go on sale on a date to be announced later this month.