CLEVELAND – The Cleveland Charge and Cleveland Monsters were excited today to host a Back to School Bash along with Immaculate Cleaning at the Halloran Park Recreation Center in Cleveland.

Local kids from the Division of Recreation for the City of Cleveland spent the afternoon with Monsters, Charge, Halloran Park and Immaculate Cleaning team members learning the basics of basketball, hockey, making crafts and playing group games. The students ranged in age from eight to 12 and had a chance to also interact with Community Resource Officers from the Cleveland Police Department and K-9 units. 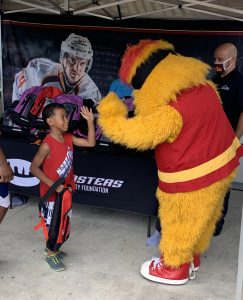 Following the end of the event, the Monsters and Charge donated 200 backpacks loaded with school supplies to be distributed to kids in the Division of Recreation for the City of Cleveland. Every backpack had basic elementary school supplies including items like pencils, crayons, notebooks, glue sticks and more as well as a specialty Monsters and Charge branded water bottle.

Halloran Park is also home to the new Monsters Learning and Recreation Center that was dedicated and unveiled at the beginning of the year. This ‘Monster Makeover’ renovated what was previously a storage space into a new and inviting room that serves as a resource for the surrounding community. Designed to reflect the look and feel of the Monsters home ice, this addition to Halloran Park is emblematic of the longstanding partnership between the Cleveland Monsters and the only ice rink publicly owned and operated by the City of Cleveland.

Halloran Park is a public facility owned and operated by the City of Cleveland.  Halloran Park is open year-round and provides a variety of seasonal programming and organized sports activities, including free hockey programming for Cleveland residents.  The facility includes an ice rink, outdoor pool, and a playground.