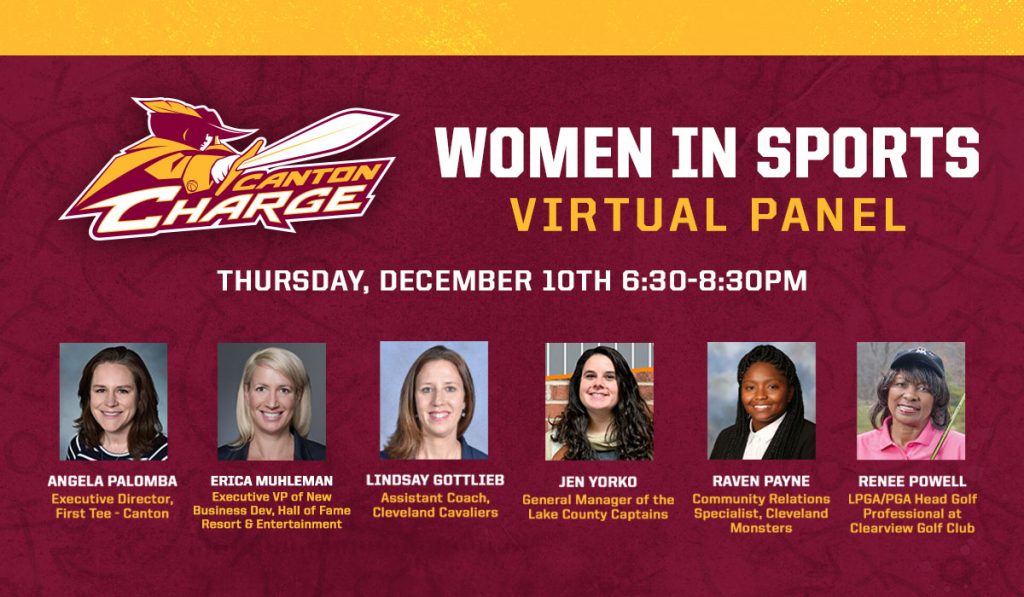 The Canton Charge, powered by the Cleveland Cavaliers, are excited to announce a virtual panel discussing the careers of women in sports on Thursday, December 10th at 6:30 pm. Our panelists will answer questions and provide insight on how they broke into the sports industry and rose through the ranks into the leadership roles they carry today. We’ll highlight the benefits and value of strong mentorship from women and we’ll discuss how the attendees can empower themselves to break into the sports industry (or any career!)

Participants can tune in from anywhere in the country, to register for the event, CLICK HERE.

Gottlieb is entering her second season as an assistant coach with the NBA’s Cleveland Cavaliers. She is an impactful part of the Cavaliers organization. Coach Gottlieb brings a depth of basketball knowledge, leadership, perspective and approach to her craft.

Palomba is the Executive Director at First Tee – Canton. Her responsibilities include oversight of the organization including fundraising, operations, programming, staffing and volunteer management. She has been in this role for seven years and prior to joining First Tee – Canton, she spent 13 1/2 years working in college sports marketing.

Payne is entering her second season as the Community Relations specialist with the AHL’s Cleveland Monsters. She assists in the development of programs designed to represent the organization and make positive contribution into the surrounding community. Her team seeks to develop positive relationships through community outreach and community volunteering.

Powell is the LPGA/PGA Head Golf Professional at Clearview Golf Club in East Canton, Ohio where she’s keeping her father’s legacy of “Golf for Everyone” alive. Renee’s work extends throughout her community as a member of several boards including the Stark County Convention and Visitors Bureau, the Pro Football Hall of Fame, Mercy Medical Center, and Pathway Caring for Children, and as a member of Rotary International.

Yorko was named the General Manager of the Class A Lake County Captains in 2019. In her role, she oversees all of the team’s business operations, such as, sales, marketing, budgeting and staff. She also works with the Cleveland Indians for their affiliation and the City of Eastlake for their facility arrangements.