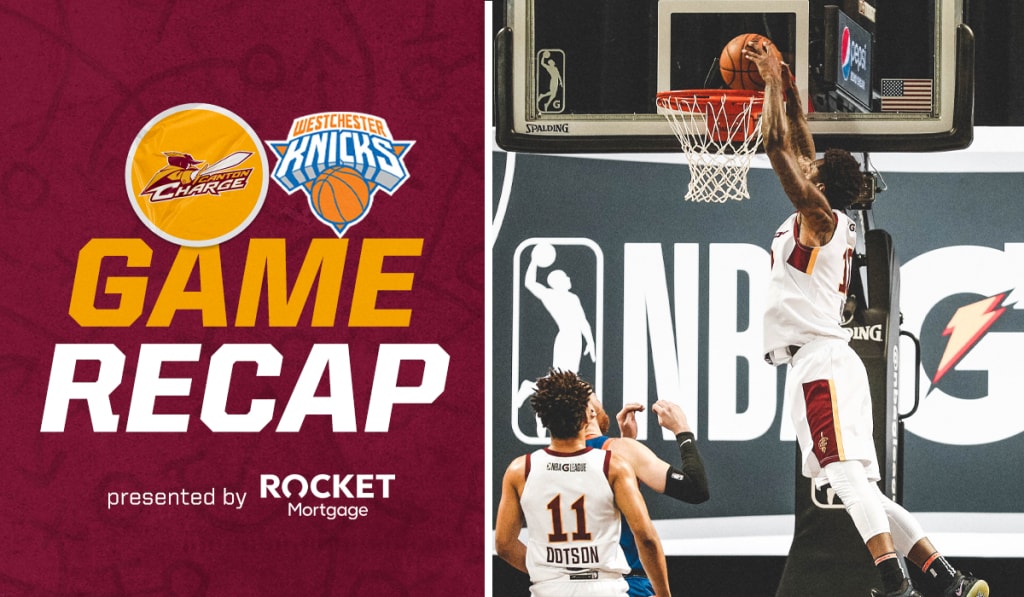 ORLANDO, FL – The Canton Charge (3-5), powered by the Cleveland Cavaliers, fell to the Westchester Knicks (4-4) by a 100-91 tally on Monday afternoon at the ESPN Wide World of Sports Complex at Walt Disney World.

Sheldon Mac paced the offense with 17 points, shooting 6-for-14 from the floor followed by Antonio Blakeney off the bench with 16. Norvel Pelle recorded his second-straight double-double with 10 points, 11 rebounds, and two blocked shots in 23 minutes off the bench. Malachi Richardson kept the Charge in the game from behind the arc, shooting 5-for-8 on the way to 15 points and five rebounds in 23 minutes of relief. Sir’Dominic Pointer was active on both ends of the court, tallying 13 points, five boards, two blocks and two steals in 31 minutes.

Louis King led the Knicks with 20 points and seven rebounds in 37 minutes while Jared Harper finished with 19, seven rebounds and seven assists. Ignas Brazdeikis (16pts/12rbs) and Simisola Shittu (10pts/13rbs/2stl) were a dominant duo in the paint for Westchester.

After a slow start in the first, the Charge entered the second quarter with a nine-point deficit and began to chip away. Richardon knocked down four threes to force multiple lead changes while Pelle hit he tip-in with six seconds left to keep Canton within one at halftime.

The Knicks took the reins in the second half with an 11-2 run to the 8:41 mark of the third and kept the lead for the remainder of the game.  Canton turned the ball over 18 times that resulted in 22 Westchester points in the game.

The Charge return to the court on Wednesday morning, going up against the Lakeland Magic at 11:00 a.m.  – Watch live on FOX Sports Ohio or listen along on 99.7 FM, Canton’s New Country!  Fans can stay up-to-date on the latest team news by following: @CantonCharge on Twitter at www.twitter.com/CantonCharge and on Facebook at www.facebook.com/CantonCharge.  Fans can download the new Canton Charge App on their smartphone via the iTunes Store or Google Play Store.