CANTON, OH – The Canton Charge, powered by the Cleveland Cavaliers, acquired the returning player rights to F Omari Johnson from the Fort Wayne Mad Ants in exchange for the rights to G Scoochie Smith. 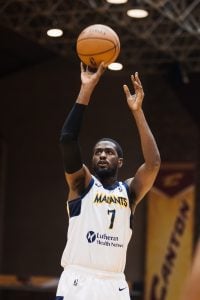 Scoochie Smith played in 58 career games for Canton (53 starts) and averaged 12.5 points, 4.4 rebounds and 6.7 assists in 33.6 minutes per game.  He also played in 2018 NBA Summer League with the Cleveland Cavaliers and most recently professionally in Greece.

The Charge next will visit the Maine Red Claws this Thursday, February 6th at 7:00 p.m. – Watch the game live on ESPN+! There is no better time than now to join Charge Nation! Become a 2020-21 Charge Nation member and attend the rest of this season for FREE!  You’ll also receive complimentary Cavs and Monsters tickets plus tons more added value! For more info, find us at a game, visit www.CantonCharge.com or call 866-444-1944.  The Canton Charge are part of the Cleveland Cavaliers organization and are also owned by a group led by Cavaliers Chairman and Quicken Loans Founder and Chairman Dan Gilbert. The group also owns and operates the Cleveland Monsters of the American Hockey League, who play their games at Rocket Mortgage FieldHouse in downtown Cleveland.