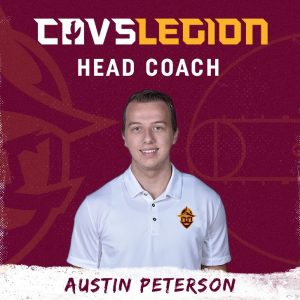 Peterson comes to Cavs Legion from the Canton Charge, the Cavs NBA G League affiliate, where he currently serves as Video Coordinator. He will remain in this role with the Charge, while assuming coaching responsibilities with Cavs Legion in the Charge offseason. Peterson will report to Cavs Legion GM, Anthony Muraco, who served in a temporary coaching capacity in the team’s inaugural season.

“We added a wealth of basketball knowledge to the Cavs Legion team today with the addition of Coach Peterson,” said Anthony Muraco, Cavs Legion GM. “His past experiences around the game of basketball, exemplary leadership skills and passion for NBA 2K make him the perfect fit for our team. We’re proud to utilize some of our own in-house talent to help grow Legion and compete for NBA 2K League championships.”

Peterson, a Northeast Ohio native, graduated from Baldwin Wallace College with a degree in Sports Management. After graduation, he interned with the Charlotte Hornets Basketball Operations team before being hired by the Canton Charge. In his current Video Coordinator position, he helps construct scouting reports on opposing teams, an experience that will directly translate to his role as head coach with Cavs Legion. Peterson has been an avid NBA 2K enthusiasts since early versions of the game, first starting with NBA 2K9.