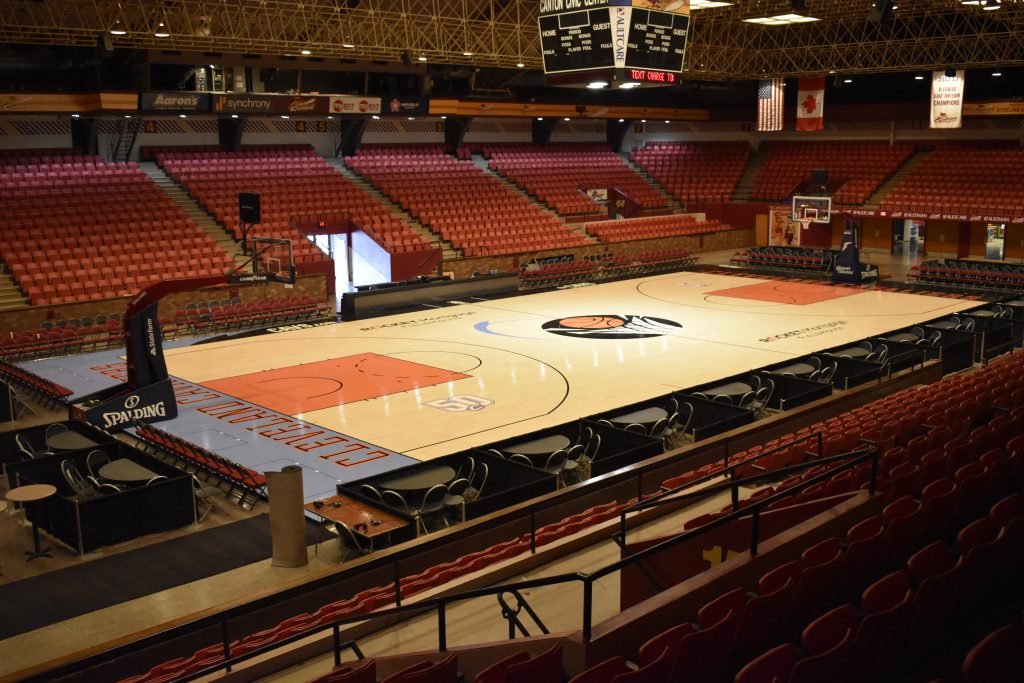 CANTON, OH – Due to damage sustained during the delivery process after being resurfaced, the Canton Charge game court will not be available for Saturday’s opening night contest. In relief until repairs are made, our Cleveland Cavaliers have provided their new Classic Edition court inspired by the Gund Arena Homecourt used from 1996-2003.

The natural maple hardwood floor is framed with a two-toned powder blue and black perimeter and is accented by the wave pattern featured in the Classic Edition design. The lane is solid orange with black and white accents. The Cavs classic logo is also displayed at half court.  The Cavaliers 50th season logo and the Rocket Mortgage FieldHouse logo can be read on each half court.

The Home Opener & Salute to Service presented by Ohio CAT tips off at the Canton Memorial Civic Center this Saturday, November 9th at 7:00 p.m. against the Lakeland Magic with tickets starting at $8! Thanks to the generosity of Charge community partners, all past and present service members who have represented the U.S. Military will be able to receive up to FOUR (4) FREE TICKETS at the box office with a valid military I.D. (subject to availability)! The night will also feature interaction with military vehicles, in-game auction to benefit local Veterans, performances by local military music groups & more!

For Charge Nation Memberships, group outings, game day promotions and up-to-date information, head to www.CantonCharge.com. or call 866-444-1944.  The Canton Charge are part of the Cleveland Cavaliers organization and are also owned by a group led by Cavaliers Chairman and Quicken Loans Founder and Chairman Dan Gilbert. The group also owns and operates the Cleveland Monsters of the American Hockey League, who play their games at Rocket Mortgage FieldHouse in downtown Cleveland.