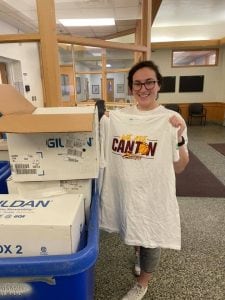 Ten years of pride and memories also makes for a lot of “stuff” along the way. Despite the move to Cleveland, the Charge were excited to be able to stay engaged in Canton and Stark County through a series of donations over the last few weeks.

First, hitting the shelters at the Domestic Violence Project, Refuge of Hope, and the YWCA, the Charge were able to donate 650 t-shirts, 35 blankets, 35 pants/shorts, and 185 pairs of socks to those in need.

Continuing our commitment to youth sports, we were able to pass out 14 basketballs, 200 frisbees, 50 golf tees and ball marks, 10 Gatorade jugs, and 8 Gatorade coolers to groups like Canton Parks and Recreation Department, Beyond the Game, First Tee – Canton, EN-RICH-MENT, and Be a Better Me. 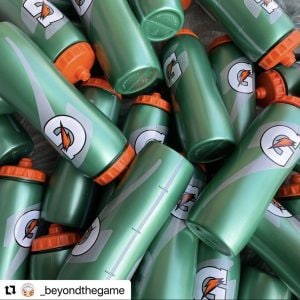 The Charge built on their relationship with MentorStark to be able to donate 100 mini hoops, 50 tiaras, 300 reusable bags, 100 reusable cups, and 150 notebooks to groups like BeYoutiful Weirdo, Legacy Project of Stark County, and more.

The fun kept going with 500 bobbleheads going out to EN-RICH-MENT’s African American Arts Festival, and Visit Canton pulled 1,000 Jim Thorpe bobbleheads as they gear up for the Pro Football Hall of Fame Enshrinement Festival.

These donations come on the heels of the Charge’s commitment to to expand youth sports, community programming and support in Canton. This also includes a commitment to address food scarcity in the region through generating a minimum of 20,000 additional meals towards local efforts, including the Akron-Canton Foodbank, and Stark Hunger Task Force. Community engagement efforts and support have been a foundational element of the Charge relationship with fans and the Canton community from the time the franchise began play there in 2011.

Fans can keep the giving going with our Canton Benefit Sale (FOUND HERE) with all proceeds benefitting the Akron-Canton Regional Foodbank!